Accueil > Resources in English > The French Representation > Meet the team 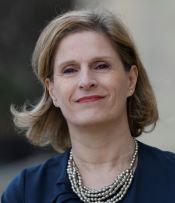 Ambassador and Permanent Representative of France to the International Maritime Organization

A career diplomat, Geneviève Jean-van Rossum has been appointed Ambassador and Permanent Representative of France to the International Maritime Organization in 2019. Before that, she held bilateral positions in the Embassies of France in Haiti, Jordan and Burundi, in Paris (Southern Africa desk, US desk), as well as multilateral positions abroad and in Paris (Permanent Representation to the UN in Vienna, Permanent Delegation to UNESCO). She has also occupied support functions in the field of finance and human ressources at the French Ministry of Europe and Foreign Affairs. In the most recent period, she was Special Representative in charge of Bioethics and Corporate Social Responsibility (2016 to 2019). She holds a bachelor degree in Applied Foreign Languages and a master’s degree in International relations from the Paris Institut d’Etudes Politiques.

To find out more

Deputy permanent representative of France to the International Maritime Organization

Damien Chevallier has international technical and legal expertise which he acquired through the various positions he has held throughout his career. He was first trained as a Technician and then as a military naval construction engineer. He spent the first part of his career (1994-2005) in the military naval industry and occupied several positions in shipyards, engineering offices, research centers and program directorate of the French Ministry of Defense. He was working at the time on surface ship and submarine design projects both for the domestic and export markets. In 2005, he joined the Maritime Safety Division of the French Directorate for Maritime Affairs. He was appointed Rapporteur for the Central Safety Commission. Thereafter he served as Deputy Head of the Regulation Unit and then became Head of the Regulation and Ship Safety and Security Unit. Since 2006 he has been part of the French delegation for the IMO’s BLG Sub-committee, then PPR Sub-committee and MEPC and MSC Committees. In particular, he has followed IMO’s work on the BWM Convention implementation, the revision of MARPOL Annex VI, the Hong Kong Convention, and greenhouse gases emissions reduction. In 2016, he became Deputy Director of the French Maritime Safety Division and finally joined the Permanent Representation of France to the IMO in September 2018 as Deputy Permanent Representative. As an Administrator for Maritime Affairs, he is also Maritime Attaché to the French Embassy in the United Kingdom. To find out more

Deputy permanent representative of France to the International Maritime Organization

After ten years of sailing on both surface ships and submarines, Philippe joined the School of Officers of the Technical and Administrative Corps of Maritime Affairs at the end of 1999. He worked as a ship safety inspector in Saint-Malo and then in Bordeaux. He joined the Port State Control Office at the Directorate of Maritime Affairs in 2009 and specialised in the human element. He was director of the Bordeaux ship security centre between 2012 and 2015. He was then appointed Head of Ship Safety and Quality Division for the South West of France in 2015. He joined the Permanent Representation of France to the IMO in early May 2018. To find out more 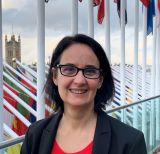 Secretary of the French Representation to the International Maritime Organization

Trained executive assistant with a master’s degree in Business Administration, she has held several positions as a P.A. and assistant in the private as well as public sector and in schools. She then worked for many years as a translator (French, Dutch, English) and teacher of French as a foreign language. Laurence has lived in the Netherlands and France for many years before moving to London in 2014. She joined the Permanent Representation of France to the IMO in February 2017. To find out more